The ABC of media bias

I have a little rule I, until now, have always stuck to on this blog and in my general dealings with the media.

Never ever attack, criticize or in any way risk offending a media organization. They are far too powerful and will simply bury you and whatever cause you stand for just for spite if you dare offend their sensitivities. 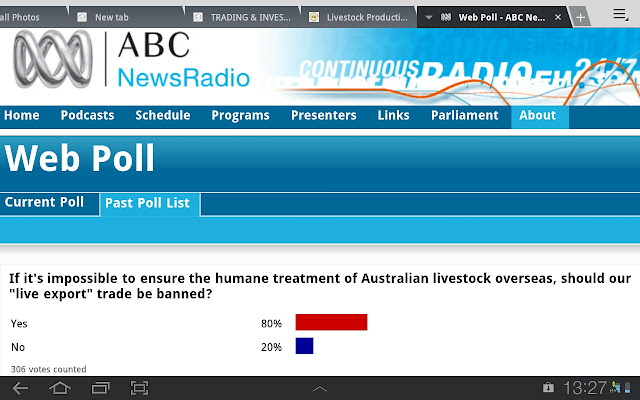 Now if that is not a loaded question I don't know what is.

The very structure of the question makes it impossible to vote no and you can bet it won't get a mention on media watch either, one could only imagine the smug reaction from Jonathan Holmes if a commercial news organization tried to get away with skewing a question against climate change in this way.

I have already written a detailed letter to the ABC pointing out where I believe they are exceeding their charter and portraying a biased picture of live export to their mainstream viewers. I received a limp wristed response from Alan Sunderland pointing out that they believed their coverage of the issue was fair and balanced and that both sides of the argument were given air time in their programs, he even cited the example of Barnaby Joyce's two or three 10 second contributions to 'Australian Story' as providing balance to that programs 30 minute lionizing of Lyn White.

Interesting to note Gleys Oogjes' admission on that program "With that first footage we didn’t think taking it to the government would be effective. We thought that exposing it to the community was the first thing to do"

The Four Corners program 'A Bloody Business' has a lot to answer for in terms of bias. The program briefly skimmed over the multi-million dollar abattoir owned by Elders in Indonesia that had been using stunning long before the filming. They also neglected to mention that four other abattoirs were already using stunning with another two in the process of converting. Some twenty five Indonesian abattoirs, accounting for 45% of all the Australian cattle slaughtered in Indonesia were either at or close to OIE standards at the time Four Corners went to air and these abattoirs formed the basis of the closed loop supply chain once the ban was lifted.

None of these facts were given any significant air time next to the constant emotive sad music and the heart breaking footage of animals being tortured in the dingy little backyard kill floors that were portrayed as the norm across the entire country.

Four Corners, it seems, did not want balance to stand in the way of a good Walkley.

For all the supposed "balance" on ABC TV I do not recall seeing one positive story about live export in the last 15 months. I have however noticed the ABC takes every opportunity to present a negative live export story, Lateline (Hosted by Sarah Ferguson's husband: Tony Jones) seeming to be particularly generous with air time on any story that portrays live export as cruel and wrong.

The only exception to this behavior being the excellent Landline program which Mr Sunderland also cited as  an example of the ABC's "balance".

Mr Sunderland the majority of Australian voters live in the cities.

City people do not watch Landline, or read ABC Rural or listen to the ABC's regional radio stations that have offered a robust coverage of both sides of the issue.

City people watch the ABC news, the 7:30 Report and Lateline. They have not been shown the human cost of the live cattle ban, the tears of the children whose parents were losing their livelihoods or given any opportunity to understand the many reasons the Live Export trade is necessary to both farmers and animal welfare. They have been fed story after story telling them this industry is cruel and inhumane and that is dangerous in a world where the sensitivities of people in inner city Melbourne matter more to decision makers than the livelihoods of communities in Northern Australia

I want to ask ABC TV

Is it too much to ask for the positive side of live export to be shown in your prime time programs?

Is it too much to ask you to show the suffering you have helped to cause in Rural Australia to your city audience?

Are you afraid of giving informed industry representatives the chance to properly explain the animal welfare benefits of live export and the reasons the trade can never be replaced with a frozen meat trade?

Or would these actions provide too much "balance".

Posted by Jim 'Ironbark' McDonald at 7:13 AM

Jim 'Ironbark' McDonald
Growing up on his families beef farm in South Gippsland. Jim has traveled widely, working across the north of Australia in the cattle industry and in the pipeline construction industry. Jim currently works on the family farm but is often forced to find outside work to supplement his income.